Multiple myeloma: a new treatment shows an efficacy of 75% in patients without alternatives

The Hospital Clínic de Barcelona-IDIBAPS has developed a new CAR-T treatment for multiple myeloma, the second most common blood cancer, with encouraging results: “all patients improve, 75% of them maintain the response and not they have disease progression at 12 months, and 60% have complete remission without residual disease “, says Dr. Fernández de Larrea, one of those responsible for the clinical trial.

This new treatment is the first CAR-T (Chimeric Antigen Recetor T-Cell) developed in Europe for this disease, the second developed by the Hospital Clínic IDIBAPS, and has the financial support of the “la Caixa” Foundation, of the Institute of Salud Carlos III (ISCIII) and the Bosch Aymerich Foundation. CAR-T is a type of cell and gene therapy in which the patient becomes his own donor. It consists of modifying the patient’s T lymphocytes so that they themselves have the ability to attack tumor cells.

The CAR-T ARI-0002h, as the Clinic-IDIBAPS treatment is called, has been tested in a clinical trial involving 30 patients with multiple myeloma resistant to standard therapies. This experimental treatment is the result of the work carried out by IDIBAPS researchers Beatriz Martín-Antonio, Guillermo Suñé and Lorena Pérez-Amill, who experimentally demonstrated in the laboratory that ARI-0002h was very specific and effective against malignant multiple myeloma cells.

Multiple myeloma is a type of blood cancer that is located in the bone marrow, where the plasma cells (a type of white blood cells) are in charge of producing, normally, proteins called antibodies. Myeloma accounts for 10% of bone marrow cancers and is the second most common blood cancer, behind lymphoma. Every year in Spain 2,000 cases of this disease are diagnosed.

Although there are various treatments for multiple myeloma, from chemotherapy to bone marrow transplantation, there are people who do not respond and therefore have a very limited life expectancy. The CAR-T ARI-0002h, developed by the Hospital Clínic-IDIBAPS team, is mainly aimed at treating these patients. The treatment has passed the clinical phase and is pending approval by the Spanish Agency for Medicines and Health Products (AEMPS) for use as an advanced therapy drug of non-industrial manufacture. 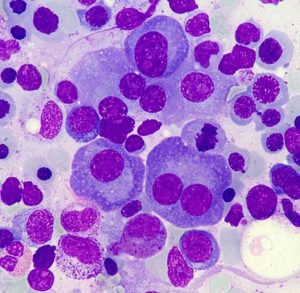